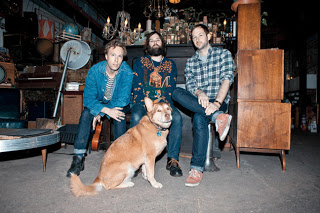 “Besides being a signature song for Suckers, “It Gets Your Body Movin’” is a mission statement for the band as well. Ever since coalescing in Brooklyn four years ago, they’ve been restless experimenters, thriving on creative momentum. And while the trio’s just-completed sophomore album Candy Salad, due April 24th on Frenchkiss, is a remarkable progression from their auspiciously far-flung debutWild Smile, it’s every bit as indicative of how they’re powered by the uncertainty of paradox. It’s a more mature work than Wild Smile, mostly because of its directness and simplicity. It has a warmer sound than their past releases, resulting from hours upon end of intense studio work, but still retains a refreshing, almost effortless feel that instantly draws in the listener.”

The band bring the tour promoting Candy Salad to The Club at Stage AE this week along with openers Turn To Crime. Guitarist and vocalist Quinn Walker was cool enough to participate in this edition of First/Last.

Thanks Quinn. I guess now Big Ben is going to scalp his Suckers ticket on Thursday?