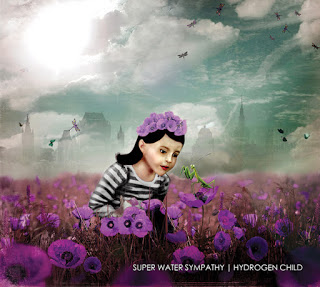 “Louisiana phenoms Super Water Sympathy are releasing their highly anticipated second full-length album, Hydrogen Child, which is the next chapter in the development of their self-made genre Water Pop…a synthesis of classic symphonic ambience with modern rock’n’roll anthems. These new songs confirm the undeniable talents of this five-piece band who have been packing Southeast venues for the past few years. Super Water Sympathy’s debut album, Vesper Belle , was released in 2011 and two tours of the United States followed. The band also lent their writing & production skills to B.O.B’s Strange Clouds with the track “Chandelier” and Vesper Belle ‘s songs were heavily featured on the MTV series “Caged”. In the summer of 2012, before heading out to perform on the highly-coveted Vans’ Warped Tour, the band flew to London to record with producer Cam Blackwood (Florence + The Machine, Coldplay, Morrissey), and emerged with the 12 new songs which make up Hydrogen Child.”

Check out the band at it’s official Website, Facebook, Twitter, iTunes and YouTube. The band’s second full-length, “Hydrogen Child“, dropped this week. My thanks to guitarist Clyde Hargrove for taking a few minutes to participate in this edition of First/Last.

Thanks, Clyde. Been digging the album for awhile now. How about an upcoming Pittsburgh date soon?