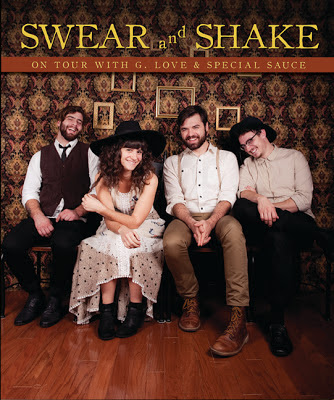 “SWEAR AND SHAKE is an indie-folk-rock quartet based out of New York. While attending school at SUNY Purchase College, singer-songwriters Adam McHeffey and Kari Spieler collaborated on a simple one mic demo. Shortly after realizing the potential in their work together, the duo was joined by electric bassist Shaun Savage and drummer Tom Elefante, adding a colorful new energy to their singable and lyrically driven songs. Although Swear and Shake is still a new band, they have shared the stage with notable acts as the Avett Brothers, Alison Krauss, Ray LaMontagne, and Levon Helm at the 6th Annual Mountain Jam Festival, and continue to play venues across the tri-state area”

The band can be found at it’s official Website, Facebook, YouTube, BandCamp, ReverbNation and Twitter. My thanks to Kari Spieler (Vocals, Guitar), Adam McHeffey (Vocals, Guitar), Shaun Savage (Bass), Ben Goldstein (Drums) for taking a few moments to participate in this ’round robin’ edition of First/Last.

Shaun: I walked over a bunch of bridges. I took a cable car up a mountain, that was neat.