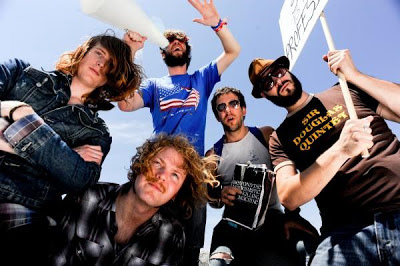 TUS are a self-described “psychedelic/gospel/grime” band hailing from both Kentucky and D.C. Before playing a mess of high profile festivals this summer, they are stopping in Pittsburgh. Drummer Robby Cosenza was cool enough to participate in this latest edition of First/Last.

With my own hard earned snow shoveling dough? Joan Jett and the Blackhearts, I Love Rock n Roll. This was 1982 in Long Island, NY, and it made a lot of sense. Only to find out later that it features members of The Sex Pistols and Ramones camp. Turned me onto 70’s punk and early college underground. A monster album. Still.

Hmmm. Probably something used, and from a lost back catalogue. Zeppelin, I think? But the newest album that I have access to and am excited about is Lykke Li. The one with Dance, Dance, Dance on it. Very minimal and very smart. And I love her. I think.

This changes, of course. Used to be Twisted Sister’s, You Can’t Stop Rock N Roll, if that gives you an indication on just how MUCH things change. Now it would maybe be Bob Dylan’s Street Legal from 1978. After the mayhem of Rolling Thunder, during the divorce, sailing like a bat outta heaven into the born-again period. Best period, on album.

Family album. Way to many junior high era pics for my taste.

I know this sounds not cool, but it is cool. UB40 and Midnight Oil. NOW – this was pre- Red Red Wine mainstream success and WAY before Midnight Oil were known outside of Australia. A shirtless Peter Garrett in black/yellow tights running around like a feaky Aussie Iggy. 1984 at The Greek Theatre. San Francisco, CA. Fact: We left early because the drums were too loud for me. Go figure.

This is tough to answer because we tour constantly, and…I mean, we played with Weezer last night in Florida (!!?). Would THAT be my last concert? Nah. I think the last ticket I got for a SHOW show was GWAR in Providence, RI. The whole band got to go. It was amazing. And filthy. Like all good things in life.

The Ramones, at Rhinestones, in the winter of 1989. Lexington, KY. Rhinestones was a 200 capacity country-western bar on the outskirts of Lexington. How that got booked I will never know. Saw a small add for the show in the local Herald and bought a $5 ticket, only to find out the night of the show that it was 21 and over. They agreed to give my mother a ticket and allow her to “parent” me and my pals throughout the show. I got Johnny AND Dee Dee’s pics, and a crew laminate. Favorite concert. Hands down.

Yikes. Weezer last night? Am I a jerk?

Ah, yes! Always been a tenacious town. I love it. Our last bout with Pittsburgh was this past February. The weather was outrageous. I think the national guard were in town. Our bassist, Colin, and I were stuck at the Greyhound station on route to KY after tracking our newest album due east in rural PA. We ended up at an old professor of Jesse’s (our singer / chief songwriter) drinking scotch from a plastic bottle, and blaring odd Beatles tunes in rapid dj-battle succession until the wee small hours of the morning. Got some killer hockey stories to boot. Thank you, Pittsburgh!

Thanks Robby! You definitely have a cool vibe going.