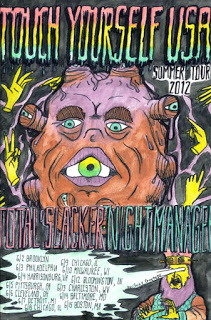 “Brooklyn’s Total Slacker IS an American psych-lo-fi-garage-noise-gaze band founded by Tucker Rountree and Emily Jane. After a killer year of shows with Thee Oh Sees, DFA 1979, The Rapture, Vivian Girls, Wavves, etc. and a successful run with their debut LP release Thrashin’, the band ventures out on this Summer’s Touch Yourself USA Tour bringing along their friends Night Manager. Night Manager draws from grungy early 90s jams and adds a 60s pop sensibility. A mainstay in Brooklyn, these boys and girls have garnered attention not only in their own backyard, sharing stages with such acts as Tennis, Frankie Rose, Bass Drum of Death, Japanther, DIIV and DOM, but have received praise from Pitchfork, Fader, Altered Zones plus many more.”

After catching Dawes for free downtown, you must head on over to GarfArt for some true DIY weirdness courtesy of a couple crazy bands from Brooklyn. Also on the bill are The Spinto Band. Total Slacker’s Tucker & Emily and Night Manager’s Tassy were nice enough to participate in this edition of First/Last.

Thanks, guys. Sounds like Tuesday will be too fun in Garfield!