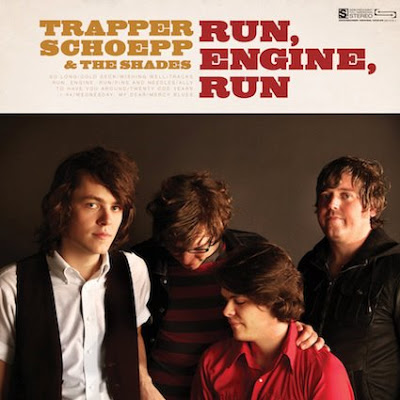 “Trapper Schoepp has the ear of a troubadour, the eye of a journalist and the heart of a young poet. He began writing songs at a tender age with startling facility, distilling rock, folk and country traditions into tunes that are at turns spirited and melancholy. Themes ranging from pride of place, love and adventure shine with surprisingly sophisticated metaphors for a songwriter so young. Run, Engine, Run won’t be out of place filed next to other artists distinguished for their early talent like Justin Townes Earle, Ha Ha Tonka and Lucero. Trapper, his brother Tanner, and the rest of their band the Shades offer this album as a love letter to their beloved home state of Wisconsin, and SideOneDummy will release it internationally on September 25, 2012. Like his namesake M*A*S*H surgeon Trapper John, the 22-year-old Wisconsin songwriter found himself prepping for surgery a month before recording his band’s third and latest album, Run, Engine, Run, the result of a gnarly BMX bike crash 6 years earlier. Fortunately, his mother gave him a guitar after the accident and Trapper was able to turn his experiences on the operating table at the MayoClinic (for spinal decompression surgery) into songs like the Stones-flavored rocker, “Pins and Needles.”

Check out the band at their official Website, Facebook, MySpace and Twitter. The band is touring behind their debut album, “Run, Engine, Run“, and stop in Pittsburgh this Saturday at Altar Bar supporting The Wallflowers. I want to thank Trapper (Guitar/Vocals) for taking the time to participate in this edition of First/Last.

Thanks, Trapper. The rules are ALWAYS worth bending for when speaking of Huey Lewis!