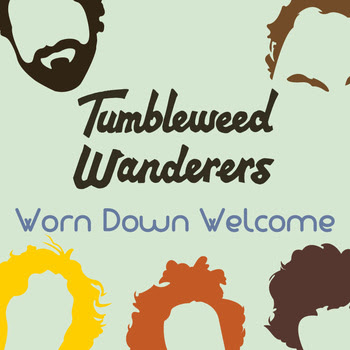 “Oakland, California’s Tumbleweed Wanderers combine soul, folk, and rock and roll to create a hugely dynamic musical experience. They weave through their shows with smooth transitions, bringing the listener from dark chaotic banjo-rock, through intimate acoustic harmonies, to energetic explosions of soul. Since forming in April of 2011, TW have been bringing their electric shows to an increasingly wider audience, from their early performances at small bars and cafes, to becoming a major local headliner, selling out shows at the Bay Area’s best venues such as Great American Music Hall and Bottom of the Hill. Since recording their debut full-length album, they have entered a period of near constant touring, starting on the West Coast, but now including all of North America, most recently opening for Angus Stone at renowned venues in the US and Canada.”

Check out the band at their official Website, Facebook, Twitter, BandCamp and Instagram. The latest release is an EP, “Worn Down Welcome” and the band have just announced a Pittsburgh date for September 7th at The Smiling Moose. I want to thank Rob Fidel (Banjo/Guitar/Harmonica/Vocals) for taking the time to participate in this edition of First/Last.

Thanks, Rob. Sorry I missed you guys last time through Pittsburgh. Not gonna happen again this September..