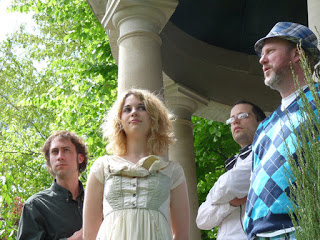 “The Van Allen Belt creates dreamy electro-orchestral psych-pop that churns and swells around the exquisite vocals of Tamar Kamin. The band has been endorsed by Julian Cope, opened for Stereolab & Atlas Sound in NYC at The Fillmore and in Philadelphia at The Trocadero, and has played with Givers, Ela Orleans, Young Galaxy, Sugar Glyder, Winter Gloves, Georgie James, and Alice Cohen. They have performed at SXSW and MidPoint Music Festival and appeared on the Under The Radar 2011 Spring Sampler. The Van Allen Belt has been described as creating John Barry-esque cinematic scores with vocals that conjure Shirley Bassey; invoking the Euro indiepop bombast of Jens Lekman to the symphonic swells of The Ronnettes; conjuring a mix between a WWII-era radio commercial and a contemporary electro-pop DJ; a Soul Coughing-esque apopalyptic vision; Zappa girl group pop; and like The Mamas and The Papas joined Crass in the Wu Tang’s yard. The Van Allen Belt is hitting the road this May while the band preps their upcoming album, with a live performance that incorporates projected visuals comprised of original animations and paintings by digital artist/painter Peter Luckner (Ohio State University).”

The band plays a hometown show tomorrow at Roboto along with Dream Job, Wild Orphans and Nelly Kate. The band’s keyboardist/guitarist Ben Ferris was nice enough to take a few minutes to participate in this edition of First/Last.

Thanks, Ben. The show sounds cool with the incorporated visuals and all!