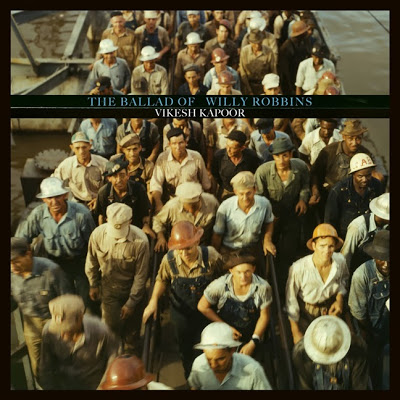 “Following a spur-of-the-moment cross-country trip with a pair of fiery European girls, Vikesh Kapoor left school for a brief yet inspiring stint as a mason’s apprentice. The America he had previously known resided narrowly between his childhood home in rural Pennsylvania and the New England university he left home for. Alongside his parents’ own immigrant struggles, these experiences quickly witnessed Kapoor to the scope of the American dream. A few years later, Kapoor performed at Howard Zinn’s memorial service in Boston, in front of Zinn’s family and colleagues (including Noam Chomsky). Roused by Zinn’s lifelong battle against class/race injustice, Kapoor spent the next two years in Portland, Oregon working on his full-length debut record. The Ballad Of Willy Robbins, a concept album loosely based on a newspaper article, chronicles the brutal but hopeful story of a working class man who slowly loses everything: ambitions, health, family and shelter. It’s a worker’s tale, less specific to the blue-collar life as it is about anyone struggling to make something of themselves.”

Check out Vikesh at his official Website, Facebook, Twitter and YouTube. Vikesh returns to Pittsburgh on Wednesday at Garfield Artworks to celebrate his latest album release, “The Ballad of Willy Robbins” via Mama Bird Recording Co. sharing the bill with Saintseneca and Advance Base (ex-Casiotone for the Painfully Alone). My thanks to Vikesh for taking a few to participate in this edition of First/Last.

Thanks, Vikesh. Turns out Adam Selzer, who produced your latest album, happens to be one of my all-time favorite songwriters!