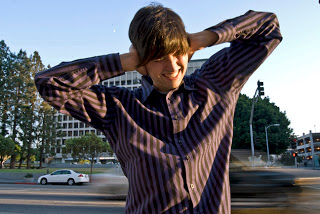 “Waterlaso is back with what they do best, writing some of the most melodic, emotional and timeless indie pop around. The Cure meets The Pains of Being Pure At Heart meets Belle & Sebastian. Blazing and majestic synth, blares gently over what LA Record has called Waterlaso’s signature “Speed Shoegaze.” This track is from one of two simultaneous album releases the band are putting out track by track, this one entitled A Dictionary of Sailing, and this song, its first single, is called “Rosebell.” This being the band’s 5th LP and second this year, whole-lotta shit going down for Waterlaso.”

I get sent a lot of music considerations and I have to admit I was immediately intrigued when I heard this band’s description. So far, the music lived up to the ‘hype’. You can check out that first single ‘Rosebell’ here. My thanks to frontman Michael Cameron for participating in this edition of First/Last.

Thanks, Michael. Looking forward to hearing the rest of the songs as they are released.