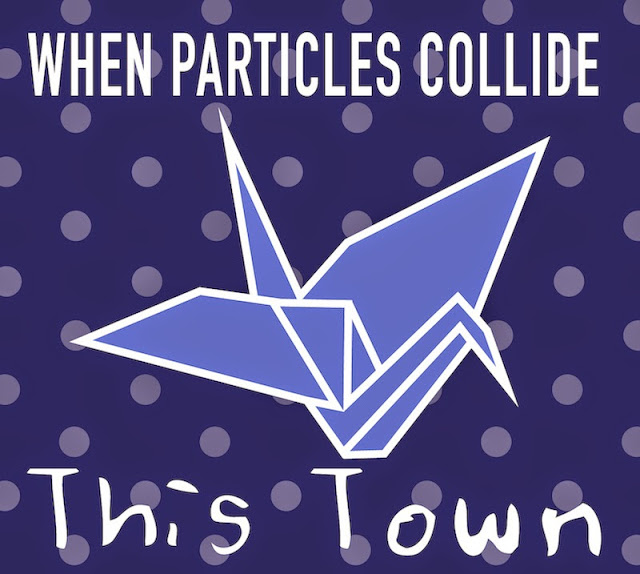 “Sasha and Chris met in Bangor Maine during a 2010 local production of Hedwig and the Angry Inch. Sasha was cast as a guitar playing Yitzhak and Chris played Schlatko, the band’s drummer. Six months later the two were a band, and three years later the band became a marriage.”

When Particles Collide is a Bangor, ME based ‘American rock duo’ who’s latest album “This Town” will be relased soon. As an early warning, they hit Pittsburgh August 8th with locals Roulette Waves. I want to thank Sasha Alcott (Guitar/Vocals) and Chris Viner (Drums/Saxaphone/Vocals) for taking the time to participate in this edition of First/Last.

Sasha: The last vinyl I bought since I’m going to interpret “album” as a vinyl album was actually taken in trade for one of our own. The Shanks “Surfing the Lexicon”.

Sasha: Michael Jackson “Off The Wall”.

Sasha: So to be a disappointing album I would have had to listen to all of it I suppose. Given that qualification I would say Four Non Blondes “Bigger, Better, Faster, More!”

Chris: Kanye West, anything after “Graduation”.

Sasha: The Steve Miller Band sometime in 1988 I believe. I was in high school and my mom’s best friend took me. I brought peach muffins.

Chris: I am going to assume one that I decided to go to by myself and not one that my parents bought tickets for and told me we were going. With that said I have to do admit that my first concert was 311.

Sasha: I can’t pick one of my own, or can I? I’ve been to so few big shows but hundreds and hundreds of local shows. Once Chris and I played a horrible show in suburban southern New Jersey a few years ago. We were truly awful.

Chris: I will not name names, but one of the worst shows I have ever been to was in Brooklyn NY. Ear bleeding awful.

Sasha: I love Pittsburgh. We’ve played there probably ten or more times. Nathan Zoob was once a student of mine when he and I both lived in NYC so we almost always play with one of his projects when we come to town. He puts on a great show and finds wonderful other bands for us to play with. I love the variety of bands in Pittsburgh and in general I love the rust belt because people seem to still go out and they also seem to like the rock ‘n roll, which is what we’re all about. Looking forward to coming back this summer.

Chris: Pittsburgh is a city that we keep coming back to because they have embraced us and made us feel loved. There is a pocket of people in PA, OH, KY, MI that love rock and roll and go out to hear new bands. Pittsburgh is one of those places where they will come see you for the first time, buy your album, buy your t-shirt and talk with you after the show. There are so many great musicians as well in Pittsburgh. With so many good musicians it makes all the bands work harder to be that much better. Such good music!

Thanks, guys. I am with you… LOVE my man, Zoob!