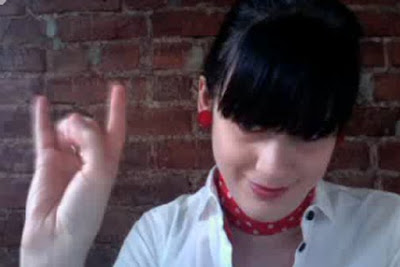 A few years ago, my brother told me to check out Pop Candy. Unbeknownst to me at the time, I would be visiting the USA Today blog daily ever since. It’s dedicated to what’s going on in the world of pop culture, or as the subtitle suggests, unwrapping it’s hip and hidden treasures. The site is somewhat addicting, mainly due it’s author Whitney Matheson. Her always fun and positive personality is as much a part of the site as the subjects she writes about. She highlights what’s happening in movies, television, comics, celebrity, the Internet and music through ‘Early Buzz’ headlines, interviews, fan meetups at various events she attends and my personal favorite, her killer musical mix podcasts. You can follow her on Twitter and there is even a new Pop Candy App through iTunes and Android. Whitney was nice enough to take time out of her seemingly impossible schedule to participate in this “bloggy love” edition of First/Last Friday.

Thanks so much Whitney. I couldn’t think of a better person to be my first non-musician participant for the questionnaire. I’m still gunning for a Pittsburgh meetup. If there was only an ideal place to have it? Hmmmm….