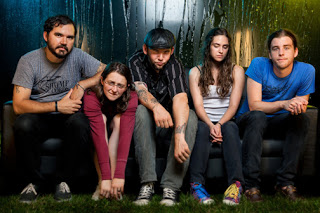 The Winter Sounds are a band hailing from Nashville and as they seemingly tour constantly, they stop in Pittsburgh tonight for a show at the Brillobox. Supporting them are hometown favs Triggers and Satin Gum. Really can’t miss with that line-up. Singer Patrick Keenan and bassist Ellen Angelico also run Vulcan Army Booking, an independent promotion and booking company. Sounds daunting but as Ellen explains, ” We don’t have to wait around for a label or manager to approve a t-shirt design, tour dates, or mix of a song. We can give away our music if we want.” Right on! The duo were nice enough to take some time to participate in this ‘DIY edition’ of First/Last.

Thanks Patrick and Ellen. There’s nothing more I appreciate in the music biz than people doing it for themselves and getting it done. Can’t commend you enough!