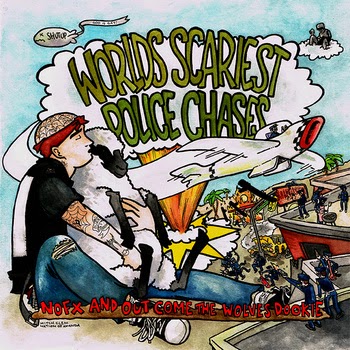 “6 cops hellbent on killing themselves or the audience. Whichever comes first.”

Worlds Scariest Police Chases are a Pittsburgh hardcore punk rock outfit that pulverize any audience that dares to go see them. Check out their last album, “NOFX and out come the wolves dookie” to get a taste of what I am talking about. I want to thank Dan Rock (Vocals) for taking the time to participate in this edition of First/Last.

Hahaha, either Red Hot Chili Peppers “Out In LA” or Rancid “Let’s Go”.

This is a super tough one… you’d undoubtedly get a different answer any time you asked me…. Gorilla Biscuits “Start Today”, Get Up Kids “4 Minute Mile” or “Something to Write Home About”, or any/all of the Hot Water Music records.

That last Get Up Kids thing… “Saves the Day in Reverie”… I’m sure there are others.

My brother dragged me to basement shows before I really understood what was going on, but the first “concert” I attended was Metallica, Suicidal Tendencies, and Candlebox. My brother took me and it was the night before they all played that Woodstock ‘94 thing.

We just played the other night at The Roboto Project with Two Hand Fools from Cleveland, Divorce and a few others. Thats the last concert I was at.

Gorilla Biscuits reunion show in Philly. Civ handed me his mic and I sang ‘Start Today’. It was incredible. Some of my favorite moments in life have happened at shows so it’s hard to pick just one.

Just like some of my favorite moments happening at shows, some of the most boring miserable times of my life have been at shows. I’d say lately any show with more than 4 bands is my least favorite. Although I was dragged to a Crazy Town show once… we can put that down as least favorite. Or The Juliana Theory, actually I change my answer. Definitely The Juliana Theory. Hands down.

Pittsburgh is amazing. There are so many things you can do here that you’d never be able to pull off anywhere else. I love it. Its my home. The community of artists and people that get shit done here is so great and I am so stoked to be a part of it when I get to. I can never say enough awesome things about Pittsburgh. “I don’t believe in miracles, I believe in Pittsburgh”.

Thanks, Dan. Nice quote on Pittsburgh, man. I feel exactly the same way.