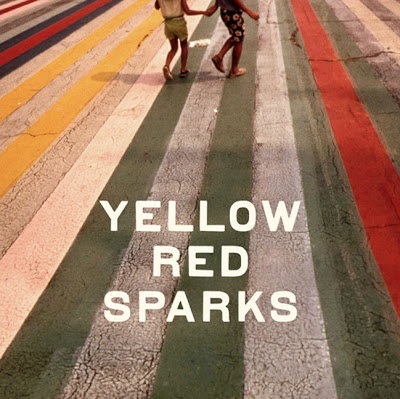 “Good coffee, cold weather, friends, family, trials, and tribulations. For some, these are the ins-and-out of everyday life. But for Yellow Red Sparks, this daily make-up holds the inspiration for their craft. The California based indie-folk trio possess a staggering ability to take seemingly normal circumstances, rewrite them with an uninhibited honesty and wistful beauty, and turn them into vivid scenes as told through their unique brand of cinematic folk. Originally a moniker for California-based solo performer Joshua Hanson, Yellow Red Sparks now represents a trio, also comprised of Sara Lynn Nishikawa (upright bass/vocals), and Goldy (drums/vocals). Together, the three recreate Hanson’s songwriting by blending lush harmonies and haunting melodies with softly echoed vocals, as so effortlessly demonstrated on their first self titled album, which was released on January 29, 2013, and produced by Ted Hutt (Gaslight Anthem, Lucero, Flogging Molly), mixed by Grammy award winner, Ryan Hewitt (Avett Brothers, Red Hot Chili Peppers, We Are Scientists), and mastered by multi-Grammy award winner, Brian Lucey (The Shins, Sigur Rós, The Black Keys).”

Check out the band’s official Website, Facebook, YouTube, Twitter, SoundCloud, iTunes, ReverbNation and Tumblr. They roll into town next Tuesday at the Moose behind their debut self-titled album supporting The Lonely Wild with local favs Arlo Aldo also on the bill. My thanks to Joshua Hanson (Guitars/Vocals) for taking the time to participate in this edition of First/Last.

We don’t really have any, but when Radiohead toured for “Kid A”, Goldy couldn’t get tickets. He hung around The Greek Theater in Los Angeles and listened outside. Hope that counts.

Thanks, Joshua. ope you have a chance to check out the city while you are here. Knowing the life of a touring band, I highly doubt it.