Image of the Day-“Are you Gonna Waste My Time?” 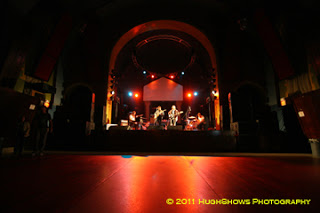 Having seen this band once before, I was excited that they were on the Sam Roberts bill because I think they are great. Apparently, not that many people felt as enthused as I did because when they took the stage there might have been a dozen or so in attendance. Add to the fact that the few people who were there stayed in the back near the bar and you could feel this set going South fast. Ouch. Undaunted and looking disaster square in the face, the band gleefully encouraged all who were there to move closer and have a good time. Damn, if that didn’t work. I see a lot of shows that do go off the rails with much less obstacles facing the musicians but these guys embraced the situation and pulled of a really fun and memorable set. Kudos to them!