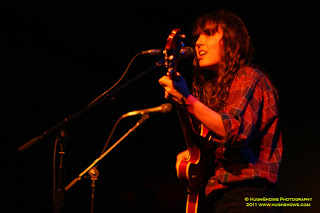 Tristen and her guitarist were the opener but you could have fooled me. There were several people there specifically to see her play based on her recently released great album Charlatans at the Garden Gate. My only complaint was the fact that she was minus a full band for the show, which wasn’t a bad thing, just lacking a certain…oomph. Read a proper review of the show here (and admire the awesome picture to boot!). More photos here.