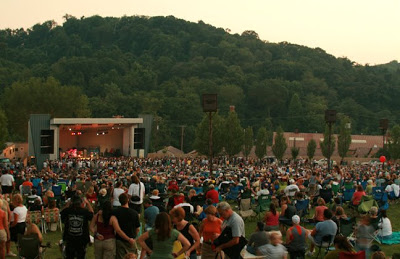 South Park Amphitheater Since Dr. Dog cancelled their show for tonight, why not hit BOC for a free show in the park? I guess that’s what SEVERAL thousand other people were thinking as well. I never saw the place this crowded before. It was pretty crazy. Every other show there before, Mr. Policeman would shoo away anyone trying to hug the stage until way into the set. When we arrived about ten minutes before the band came on, there were several rows deep of fist pumping headbangers that Joe Fuzz didn’t dare bother with. As for the show, I did enjoy it. Believe it or not the weakest songs in the set were the ones I actually recognized (‘Godzilla’, ‘…Reaper’). I also thought they would play a bit longer as other acts have in the past but that was a blessing since it took forever to get outta Dodge.