Image of the Day-“In This Life” 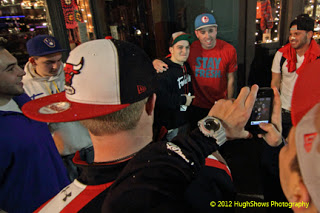 I thought this was fascinating. As I was leaving the Charles Bradley/Little Barrie gig, there was a crowd of extremely enthusiastic teens(?) gathered around on the street. I asked one of them what was up and he told me they just left the Mike Stud show at Diesel and were forced by the club to have their meet-n-greet outside (across the street from the club, no less). What really threw me off was the sheer joy these kids were having meeting this guy and taking pictures with him. These kids were seriously geeked to hang with him (or maybe they were all just Red-Bulled up, who knows?). Even though I had absolutely no clue who he was, it was cool to see the power of music has regardless of genre as well as the awesome way he treated his fans.