Image of the Day-“Little Something” 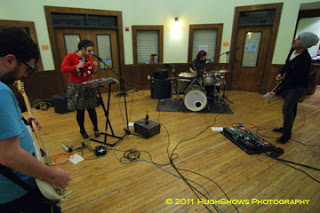 When the band invited me to shoot their last rehearsal with Andy before he leaves Pittsburgh to pursue new adventures in Texas, it took me about two seconds to say yes. I have grown extremely fond of these people and it was bittersweet to say the least to hear the band run through their set that they will perform tonight for a probable sold out “sink or swim EP” release show at Brillobox, the last time Andy will be playing with Big Hurry.

Before I get too melancholy here, I would like to point out the space where the rehearsal took place. As well as being the band’s kick-ass singer, Kelly works at the Union Project which is a restored church that was abandoned and is now a non-profit space dedicated to the arts in the community, something near and dear to my heart as well as all involved there. Check out more information here.