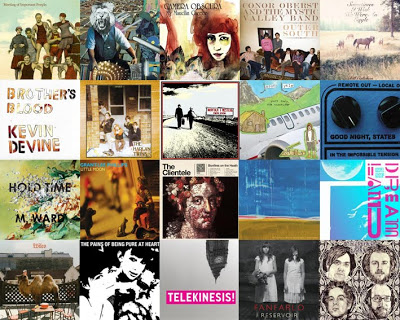 The band’s picture isn’t the first thing you see on this blog by accident. This became my favorite album of the year about two minutes into their CD release show in March and has stayed there ever since. Local, national, heck, even international, this was the best thing I heard all year.

Hallelujah The Hills-Colonial Drones Such a strong sophomore effort from these guys. Can’t wait to see how they grow over time.

Camera Obscura-My Maudlin Career I was admittedly late coming to their party but this album hooked me fast.

Conor Oberst & The Mystic Valley Band-Outer South I’ve grown to love Conor over the last few years but his band of semi-all-stars rise to the occasion on this album. Bill Callahan-Sometimes I Wish We Were An Eagle This is the wild card of the bunch. I will never be able to explain how or why I dig this so much.