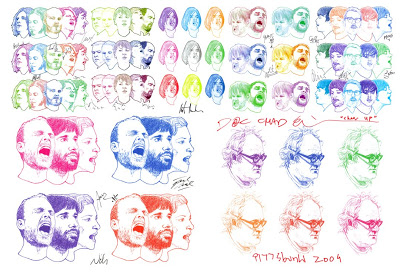 As with the previous posts, in no order:

I LOVE this band. They opened for A.C. Newman (whose set I had to duck out early for to hit MOIP’s CD release show). Two top shows of the year in one night!

I finally got on this band’s wagon this year and can’t believe it took me this long. Their acoustic set at YEP in the afternoon was just as good as the show proper later that night.

When Joel Gion and Matt Hollywood ambled on stage there was a collective gasp in the audience as the band blasted away and never looked back. Being invited on stage by the tour manager to shoot was icing on the cake. I do have to say the this was the grossest, weirdest, cranked out crowd I have ever been in. YUK!

I missed their show the previous night but had to settle for this short studio set, which was awesome and had me promising myself to never, ever miss them again.

This band was just so much fun. A very late in the year surprise discovery.

It’s hard to imagine this is a sparse trio with the amazing music they make. A band with a huge future.

This was extremely cool. A veritable ‘unplugged’ in a coffeehouse! I love seeing shows in unconventional settings.

I will never forget the day I had the privilege of hanging with the band as they ran through the new EP for their release show. My own private concert! Thank you so much.