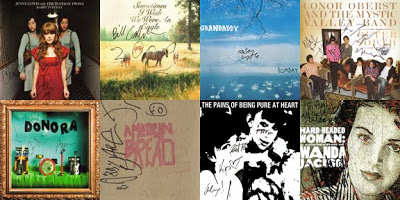 Again, in no particular order:

I really like both of Jenny’s solo releases. She was fun, energetic and sounded great live. An added bonus was that my photo pass wasn’t regulated to just the first three songs as is the usual. I was able to snap all night.

I always scratch my head that there are no in store performances in the city. I love these intimate little sets. He was as laid back as his music.

Perfect music for the atmosphere. Blew Neko away.

First time for Conor to play here since Monsters Of Folk in 2004. Didn’t disappoint. My only complaint was that they skipped my favorite song off the album, “Difference Is Time’, which was on the set list. Boo.

Donora and MOIP play on the big stage! Taking the family down for a free show is always fun.

Too bad I missed Deadstring Brothers, Scotland Yard Gospel Choir, and Dex Romweber Duo because of those pesky fireworks.

Is this band worth all the buzz? In concert they sure are.

A musical legend…in a bar? She surprised me that she totally brought it besides the fact that she is 72 years old!