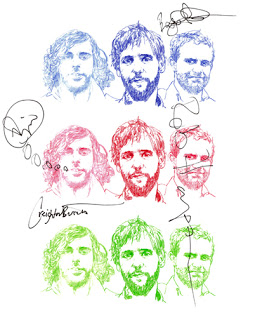 I can’t tell you who much I love Band of Horses. I instantly went crazy for their first album. The second album was a grower for sure and the more I listen to it, it’s amazing. Then they release the third album…I’m done. So good. Maybe my favorite of that year? I’m gonna convince you?

This is from some art I produced in 2007. The guys were super nice to me and two other girls waiting for them after the show. They were all worried about getting kicked out of Diesel that night. I’m a grown ass man! Just chill and it looks like your with the band. That’s what I told them and it worked.