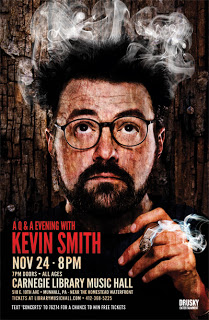 “Kevin Patrick Smith (born August 2, 1970) is an American screenwriter, actor, film producer, and director, as well as a popular comic book writer, author, comedian/raconteur, and internet radio personality best recognized by viewers as Silent Bob. Although primarily known for the View Askew film series, Smith also directed and produced films such as the buddy cop action comedy Cop Out, as well as the horror film Red State. His first several films were mostly set in his home state of New Jersey, and while not strictly sequential, they frequently feature crossover plot elements, character references, and a shared canon in what is known by fans as the “View Askewniverse”, named after his production company View Askew Productions, which he co-founded with Scott Mosier. Smith is also the owner of Jay and Silent Bob’s Secret Stash, a comic book and novelty store in Red Bank, New Jersey.”

Courtesy of my friends at Drusky Entertainment, I have a pair of tickets for this show. Enter by sending an email with the subject line ‘Kevin Smith’ to hughshows@comcast.net with the person who’s name will be on the guest list in the message body. Please bring photo I.D. to this all ages show. This contest runs until Friday, November 16th when the winner will be randomly chosen and contacted. Thanks and good luck.