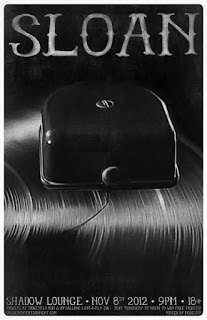 “Sloan is four distinct songwriting voices — guitarists Patrick Pentland and Jay Ferguson, bassist Chris Murphy and drummer Andrew Scott — that nonetheless form a cohesive collective. Long-time Toronto scenesters who will always call Halifax home. Muchmusic and rock-radio regulars who — via their own murderecords label — maintain strong ties to their indie roots. Money-city maniacs who have a soft spot for sweet sugar tunes. Music vets who, instead of coasting on their cred, continue to challenge themselves with each record.”

Courtesy of my friends at Drusky Entertainment, I have a pair of tickets for this show. The band is said to be playing it’s second album, 1994’s “Twice Removed” in it’s entirety for this tour. Enter by sending an email with the subject line ‘Sloan’ to hughshows@comcast.net with the person who’s name will be on the guest list in the message body. Please bring photo I.D. to this 18 and over show. This contest runs until Friday, November 2nd when the winner will be randomly chosen and contacted. Thanks and good luck.