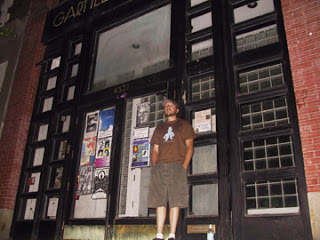 You probably never heard of Neil Jackson. He’s a friend of mine.

How I stumbled upon his music kind of escapes me now. He fronts an unassuming band from of all places Oakdale, California. Maybe it was through Grandaddy. Or Earlimart. Or Dios Malos I heard of his music? Regardless, I discovered the band’s second album Autumnland and I was not only instantly hooked, I was contacting Neil to ask him not when but how fast he was going to play Pittsburgh. You see, back in the mid-Aughties, there weren’t blogs galore fighting for ticket giveaway rights or publicists spamming your inbox. If your favorite album of that year was important to you, you damn well did something about it. It was a fan to artist interaction and a simple email was all it took to get your that band to play Pittsburgh if you asked the right way. It worked for me several times. How do you think I saw Built Like Alaska. (or The Mendoza Line, or Great Lake Swimmers)? I ended up getting them a gig, a place to stay, and a meal! With many thanks to Manny, my rock and roll dreams came true that night in 2005! With a fantastic new album out, I am really happy Neil took the time out to participate in this edition of First/Last.

Thanks buddy. Coming back to play Pittsburgh soon? I’ll save a table at Eat N Park!