Image of the Day-“Building A Boat” 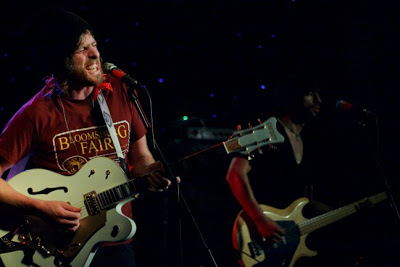 The concert gods were very good to Pittsburgh on this night. Three killer shows were happening around town and I had to decide which ones to attend (I felt like Sophie with her choice). The bad news is I had to leave the incredible Okkervil River show a half hour early (and totally skip the Old 97’s show all together) to catch my boys from Nova Scotia, eh! The good news is it was way worth it. Thankfully, they played second on a late night bill, and I was able to witness every scorching note. Amazingly, only FIVE other people were there as well (I’ll boldly take credit for turning on two of said fans to the band). This might be the most criminally sad example of a great band playing to a relatively empty house that I have ever seen (even more so than the four people at the Margot & The Nuclear So & So’s show at the same club a couple of years ago). What a bummer because this band is just so good and deserves way more love.

Is there some weird invisible barrier between the U.S. and Canada that prevents established, popular bands up there to not be known here? We are only a few scant hours away from our neighbor to the north, but it might as well be the other side of the globe in some respects. This band can easily sell out a room like The Byham (which holds a little over a thousand people) in their home turf, but nobody shows up here? And try to get their first CD at a show (or online for that matter). It’s easier to find a copy of The Beatles ‘Butcher’ album cover. Free trade agreement me arse.